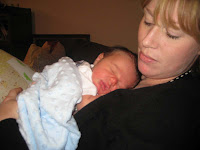 After she had her baby (Charlie, my 800th baby) the other day, this new mum said, "You know, once you're in it, labour isn't scary! You just do it!"

I have so many clients who have carried the fear of childbirth with them for years and years. Some even postpone the event for as long as possible, just because their friends (or families) have told such horror stories over the years.

I tell my clients that our bodies aren't going to spring something TOTALLY NEW on us when we're in labour. Birth is something you know! Contrary to popular belief, labour really feels like period cramps, low down, way down there, NOT all over your body. And it comes and goes (unlike period cramps which are continuous and can last for days). Yes, it gets very strong, but, as long as the birth is normal and you have continuous support, it is totally do-able (not totally fun). (Remember, the World Health Organization believe that 10% of birth should be cesareans, no more. That means that 90% of births should be "do-able".)

Surprisingly, labour can be frustrating, even BORING, at the beginning. Your body hasn't taken pity on you and started the endorphin surge yet (ah, when it comes, SO good). Until those endorphins kick in, you're fully present, fully raw, feeling and thinking and using your left brain (nasty left brain). You start to think, "If it's like this now, I'll never be able to take it when it's 10 times worse." It shouldn't be scary if your doula is talking you through this part on the phone, or popping over to your house, if necessary. But, hang on, if birth is undisturbed (that's the key!), then it never gives you more than you can bear. Active labour begins, your endorphins kick in, and your body goes into auto-pilot...no thinking...you just "do". And you can do it!

Your friends probably found labour scary because they didn't have the assistance of a doula or midwife, didn't have an undisturbed birth, didn't work through their fears in advance...nine out of ten times you'll find that the couple were on their own, left to stumble through it alone. Now that's scary!

So, the other day, we headed to the hospital when her contractions were close together and very strong. Bloody show - check. Feeling pressure - check. Contractions palpate as strong - check! She was at the "frickety! frickety!" stage (as one mum described it). She loved standing by the sink, both at home, then at the hospital. We got through the passing request for an epidural (always happens at 5cm) and out the other side (I was thankfully backed up by our amazing nurse). As her labour progressed and the endorphins kicked in (big time!), her face became smoother, she began to sway her hips, she became calm and quiet. The lights were low. It was beautiful to watch her labour progress undisturbed. I knew everything would be fine.

This is a woman who had thought that labour would be very scary. But, with support, she found that this was something that she'd done so many different times over her lifetime - labour was a challenge which she could meet. She had the mental fortitude, life experience, and the tools at hand. Birth was something she knew. I don't think she'll be scared about anything again.

Crashing through our fears and our cultural myths is what's scary - Birth isn't.